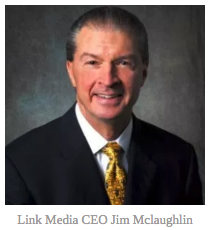 ROSWELL, Ga.–(BUSINESS WIRE)–Link Media Holdings, LLC (“Link”), a wholly owned subsidiary of Boston Omaha Corporation (NASDAQ:BOMN), today announced that CEO James A. (Jim) McLaughlin has decided to retire from the company effective January 1, 2020. Scott LaFoy, currently serving as the Head of Mergers and Acquisitions at Link, will be taking over as the Interim CEO. Jim will remain engaged in a consulting role through the first quarter of 2020 to assist with the transition.

Mr. McLaughlin joined Link in March of 2017 and has guided the company through three years of rapid growth, more than quintupling the number of billboard faces over this three-year period and making Link a leading outdoor advertising company in the U.S. Prior to joining Link, Mr. McLaughlin operated several major outdoor advertising companies for various investor groups over his more than 46-year career.

Link has begun the search for its next permanent CEO and, in addition to Mr. LaFoy, will also consider selected external eligible candidates before making a final hire. Mr. LaFoy has more than three decades of experience in the billboard industry and joined Link in May 2018. Mr. LaFoy spent 14 years building and operating his own billboard company, LaFoy Outdoor Advertising before selling it to Fairway in 2015.

“Link Media Outdoor is a profitable, scaled business because of the tireless work of Jim and the team he has assembled. Adam and I are tremendously appreciative of the job Jim has done and we wish him all the best for his well-earned retirement,” said Boston Omaha Co-CEO and Co-Chairman, Alex Rozek.

Mr. McLaughlin stated, “I turn 70 in a few weeks, and I’ve been working hard since I was 13 years old. I look forward to spending time with family and friends. A huge ‘thank you’ to Adam Peterson, Alex Rozek and Josh Weisenburger for the opportunity. It has been exciting, fun, and a blast building and running one of these companies one last time.” 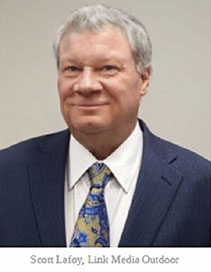