Learn more about the billboard technology revolutionizing the way you advertise

What Are The Advantages? 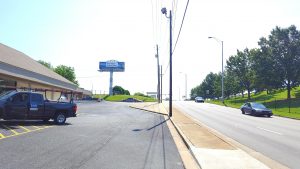 The idea of communicating in large pictures and minimal words is as old as cave drawings and hieroglyphics. While communication has significantly evolved since then, the more things change the more they stay the same. Billboards are not only still relevant – they are having a relevance revolution.

Today, there are more than 400,000 billboards* lining our roads, highways, bridges and byways. In a sea of competing marketing messages, they serve as the only form of communication consumers will definitely see on any given day.

It’s true. Arbitron data confirms that the average American spends 11 hours out of their home daily, including two hours in the car. That’s more than they spend watching television, reading newspapers and magazines, listening to the radio, or, even online – the only media consumption trend that is rising. And you can’t forget smart phones and tablets, which are taking consumers’ attention away from traditional media, especially when it comes to consuming advertising in those mediums.

This is Good News for Billboards

While consumers are more empowered to choose the media they consume, they have little choice when it comes to using the roads to get to and from work and social obligations. They simply must see billboards, and depending on traffic density and patterns, they will spend substantial amounts of time looking at them. These captive eyeballs create an exciting opportunity for marketers looking to stand out from their competition by providing their customers with relevant information and messaging.

Data shows that traditional, static billboard messages will eventually become “background noise” in a message landscape. But the ever-changing content of the roughly 3,200* known digital billboards stays fresh and ensures that you’ll capture a glance from passers-by.

Digital billboards allow marketers to tell a bigger, more relevant story through brighter, vibrant images, well-chosen words and dynamic content based on a number of possible variables – time of day, day of the week, weather patterns, game scores, and more. When a company spends money on digital billboards, they’re buying time, not space. It is almost more like buying broadcast media in many ways.

Along those lines, digital billboards are also budget friendly. Sharing time on a digital billboard can provide a significant increase in return on investment over more traditional advertising – including static billboards – according to a Sign of
the Times magazine survey.

Consider making digital billboards part of your marketing mix. With the right combination of strategy and creative, we are confident you will see the value in this engaging marketing opportunity.